Do Sharks Eat The Internet?

February 04, 2019
How much of your business Internet traffic goes offshore?
How does it get to and from Australia?
Here is some Information about the Internet’s Undersea Cables. 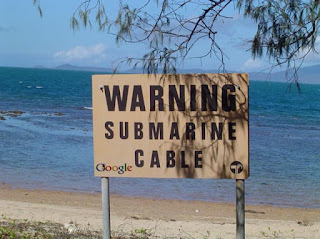 Australia’s submarine communications cables carry the bulk of our international voice and data traffic and are a vital component of our national infrastructure, linking Australia with other countries.

Submarine cables are vulnerable to damage and breakage, which can cause serious consequences for the flow of information to and from Australia. Cable damage can cause data loss, significant delays, and severe financial loss to businesses, cable owners and individuals who rely on communication links with other countries. 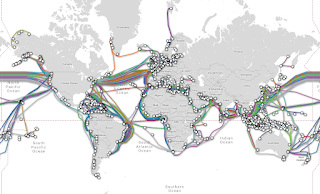 Currently, 99% of the data traffic that is crossing oceans is carried by undersea cables. The reliability of submarine cables is high, especially when multiple paths are available in the event of a cable break.

As a result of these cables' cost and usefulness, they are highly valued not only by the corporations building and operating them for profit, but also by national governments. For instance, the Australian government considers its submarine cable systems to be "vital to the national economy". Accordingly, the Australian Communications and Media Authority (ACMA) has created protection zones that restrict activities that could potentially damage cables linking Australia to the rest of the world. The ACMA also regulates all projects to install new submarine cables.

What is a ‘Protection Zone’.
These are geographical areas of the coastal waters of Australia where the cables come up out of the ocean onto land.

While Australia has hundreds ISP’s and several international fibre optic links, we only have 4 Landing Stations for these fibre cables. The locations are not secret, in-fact the locations are in the public domain, specifically for the marine industry so that fishing boats don’t accidentally drop an anchor on them!
And here they are;

Antarctica is the only continent yet to be reached by a submarine telecommunications cable.

In total, they are hundreds of thousands of kilometres long and can be as deep as Everest Is tall. 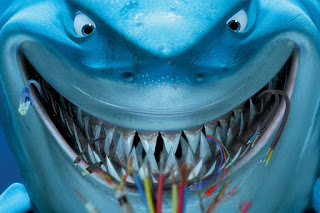 There’s disagreement as to why, exactly, sharks like gnawing on submarine communications cables. Maybe it has something to do with electromagnetic fields. Maybe they’re just curious. Maybe they’re trying to disrupt our communications infrastructure before mounting a land-based assault. The point remains that sharks are chewing on the Internet, and sometimes damage it.

For the geeks reading this, have a look at these grouse sites;

Popular posts from this blog

What is a business inbound number?

January 22, 2019
What is a business inbound number? An inbound number is a virtual business number that is used exclusively to receive and manage your incoming calls. Calls made to your inbound number can be redirected to your preferred answerpoint, such as your mobile, office phone or even a professional answering service. The most common inbound numbers are 1300 numbers, 1800 numbers and 13 numbers. Smartnumbers or Phone Words are also inbound numbers that gives you flexibility and control over your incoming business calls. Why choose an inbound number Inbound numbers such as 1300 or 1800 numbers can serve as a great business tool. Not only do they make your business look more professional to prospective customers, they offer far more flexibility and portability over a standard business phone number because they are not tied to a fixed landline or location. What is the difference? 1300 NUMBER 1300 numbers are the most popular form of national business phone number, and for good
Read more

30 years old and no longer wanted.

I love telecommunication acronyms, one I’m especially proud to be able to quote instantly is “ISDN”. “Integrated Services Digital Network”, which was born in 1986 and Telecom Australia was one of the first telecommunications carriers in the world to introduce ISDN starting in 1988. Now just over 30 years later, Telstra will commence the disconnection of copper ISDN services from the end of September this year, as the NBN rollout continues to bring business-grade networking solutions online. Telstra issued a “stop sell” to all retail and wholesale customers for ISDN2, ISDN2 Enhanced, ISDN10/20/30, DDS Fastway, Megalink and Frame Relay products on 30 June 2018, encouraging users to find alternative replacement solutions ahead of a “final exit date”. That final exit date on copper ISDN services is approaching, according to a Telstra spokesperson. “As part of the NBN rollout, copper  ISDN services are being disconnected from September 30th, 2019. Remaining custo
Read more

March 22, 2020
For those used to working casually at home and otherwise using a residential network for personal reasons, you might find that you need more than you have for constant calls, file transfers, and videoconferencing. Now is a terrific time to scrutinise your online setup. This includes your choice of internet provider, how much you are paying for their services, and whether the internet gear in your home is up to date. Do you have the right provider? Compare what each provider has to offer. Home workers may find that a high-speed downstream connection that works great for video streaming is paired with a low upload speed that can’t handle bidirectional video or file uploads and sync with work. You may be able to get your current provider to bump your plan up or you might need to switch. Lose the cap: Some RSPs impose a limit on how much data you can use each month, after which you are throttled to a lower speed, cut off, or pay overage fees. You should t
Read more